Things We Do For Love: Powerball Winner Spends $9 Mill To Bail Boyfriend Out Of Jail…

Super Moderator
Things We Do For Love: Powerball Winner Spends $9 Mill To Bail Boyfriend Out Of Jail…Twice

You may remember back in February, we were all excited to learn that Marie Holmes, the 26-year-old, single mother of four, had won the Powerball lottery.

Holmes, of North Carolina, decided that she was going to accept her $188 million winnings in one lump sum, meaning she was awarded $127 million. After taxes, she received $88 million. And while Holmes announced that she had plans to pay her tithes and set up college funds for her children, she’s ended up doing something entirely different with her riches.

Shortly after she won the money, Holmes posted $3 million bond for her boyfriend Lamarr McDow. McDow was in jail, facing heroin trafficking charges. McDow was implicated after an investigation unearthed more than 8,000 bags of heroin.

But Holmes found herself behind bars too recently. Last month, police came to her home to arrest McDow who had violated conditions of his parole by missing curfew. When officers searched the house, they found McDow had a .45 caliber pistol and there was less than a half an ounce of the drug and paraphernalia in Holmes’ Brunswick County home.

She then spent an additional $6 million to get McDow out of prison. He was released with a GPS monitoring device.

Two other people in the house were also charged with simple possession. Three children were present at the time of the arrest, McDow said they were his children.

According to WWAY, Holmes and McDow are engaged. And they also reported that Holmes took to the news station’s Facebook page to respond to criticism about the story which has been reported, for the most part, on local news outlets

“What Y’all need to be worried about is Y’all money and not how I spend mine this is benefitting Y’all how? And no he’s no drug dealer or user but who are Y’all to judge anybody? I will definitely pray for Y’all because it’s much need…they talked about Jesus so I’m not surprised Y’all are talking about me but be blessed though,”

This morning, when I first read the story, I was trying to give Holmes the benefit of the doubt. There are plenty of Black men who are arrested for little to nothing. But 8,000 bags of heroin is not nothing, even if less than an ounce of marijuana is.

While we can certainly question Holmes’ choices in both men and behavior, we really don’t have any right to tell her what to do with her money.

If there’s one thing I can’t stand, it’s for people to count other folks’ money. No matter who that person may be. We are generally too concerned with what other people are doing. She is right in that our perception of her squandering money really doesn’t benefit anyone, particularly since it was never ours to begin with. Sadly, that’s what happens with lottery winners. We seek to learn how these lucky people are spending money we wish we had. And a single, Black mother supporting her alleged drug-dealing boyfriend is local news gold. As it gives the average Joe a chance to turn his nose up at the rich.

If Holmes wants to spend up her newfound fortune on a man, in and out of jail, that’s her decision to make. If some of us are honest with ourselves, if we had $3 or $6 or $9 million dollars to give, we’d likely be bailing our loved ones out of jail too. Truth be told, it’s easy to shake our heads and wag our fingers in disgust and disapproval; but we’ve all done crazy, foolish and even expensive things for love.

BGOL Investor
Re: Things We Do For Love: Powerball Winner Spends $9 Mill To Bail Boyfriend Out Of J

Been here longer than you think!

BGOL Investor
Re: Things We Do For Love: Powerball Winner Spends $9 Mill To Bail Boyfriend Out Of J

Search the board. This is like the 4th thread on this chic posting bail for this dude.
L

Registered
Re: Things We Do For Love: Powerball Winner Spends $9 Mill To Bail Boyfriend Out Of J

He was arrested again.

"Hot Sauce" is in hot water again. At least he has a super-rich fiancée.

The man engaged to a $188 million jackpot winner in North Carolina needed to be bailed out of jail for the third time in less than a year on Monday.

McDow was arrested on heroin charges last November, and again in July for violating curfew terms of the his release, the station reported.

"Hot Sauce" was held on $3 million bond and $6 million bond following the first two arrests, but that's chump change for fiancée Marie Holmes, who elected to pocket a lump sum of $88 million in Powerball winnings early this year.

After the most recent indictment, McDow turned himself into authorities. He was released soon after — this time on just $10,000 bail, according to the Atlanta Journal-Constitution.
Click to expand...

Marie Holmes was 26 years old and working five jobs to support her children when she won the $188 million Powerball jackpot in 2015 — the largest jackpot winnings in North Carolina history at the time.
She had big plans for the money, which totaled $87.9 million after taxes, according to the N.C. Education Lottery. Holmes told lottery officials she planned to give some of the prize money to charities and religious organizations, as well as put it toward finishing her college degree and buying her mother a house.
But according to her ex-fiance Lamarr Andre McDow, the winnings also went to generous gifts for him that she allegedly gave away or sold after they split up.
Now he’s suing to get them back.

McDow, 36, accused Holmes of breaching her fiduciary duty when she reportedly gave away his 77-acre dirt bike track, his car repair shop and tens of thousands of dollars worth of clothing and jewelry while he was in prison, according to a lawsuit which moved to federal court earlier this month.
Attorneys representing McDow and Holmes did not immediately respond to McClatchy News’ request for comment. But Holmes said in court filings the gifts were never in McDow’s name and legally belonged to her.

“This case is the embodiment of the phrase ‘[w]hat’s yours is mine and what’s mine is my own.’ The problem here, however, is that McDow has nothing of his own,” Holmes’ defense attorneys said in a motion to dismiss the case. “Instead, McDow is Holmes’ disgruntled, currently imprisoned former fiancé with multiple criminal convictions and an unfortunate desire to pursue meritless litigation against Holmes, whose generosity after winning the Powerball lottery is at the heart of this litigation.”

Spending her winnings
According to the complaint, McDow and Holmes started dating in 2012 and had two daughters together. McDow was arrested in November 2014 and charged with drug trafficking.
Two months later, Holmes won the lottery.
McDow was convicted in April 2016 and sentenced to 10 years in prison. He remains incarcerated with a projected release date of June 2, 2023, Department of Public Safety records show.
Holmes is from Shallotte, a small town on the coast of North Carolina less than 15 miles from the South Carolina border. According to the Education Lottery, she was working at Walmart, Food Lion, KFC, McDonald’s and Subway when she won the Powerball jackpot on Feb. 11, 2015.
Her odds of winning were 1 in 175 million.

“I started screaming and jumping around,” Holmes told lottery officials at the time. “I said to my kids, ‘You just don’t understand what this means.’”
In the months that followed, Holmes reportedly bought multiple houses — including a plantation in Brunswick County — and designer cars.
Before McDow reported to prison, the complaint said Holmes bought him a $250,000 Chevy Stingray, two dump trucks totaling $125,000, $100,000 worth of clothes and jewelry, a $600,000 automotive shop and 77 acres in Ashe County for a dirt bike track costing $80,000, among other gifts.
McDow made Holmes — then his fiancee — his power of attorney.
Holmes appeared on a reality TV show on the Oprah Winfrey Network called Iyanla: Fix My Life, in which inspirational speaker and author Iyanla Vanzant tried to help Holmes overcome challenges from the “financial windfall” of winning the lottery.
The episode, which aired in October 2016, was titled “Lotto Drama.” McDow also appeared in the episode, which his attorney cites in the lawsuit.

An acrimonious split
Holmes had their second daughter while McDow was in prison, but the two reportedly split up in August 2017. Eventually McDow heard through a friend that Holmes was dating someone new and had given away his clothing and the dirt bike track, in addition to shutting down the car repair shop, the complaint said.
“Ms. Holmes’ unconditional obligation to act in the best interests of Mr. McDow didn’t stop because Ms. Holmes and Mr. McDow’s relationship ended,” his attorney said in court filings, citing her power-of-attorney status.
The lawsuit makes claims for breach of fiduciary duty, conversion and breach of bailment. McDow is seeking a jury trial and more than $25,000 in damages.
But in a motion to dismiss filed Thursday, attorneys for Holmes said there numerous deficiencies in his complaint.
They said Holmes — who has lived in Washington state for “several years” — was never properly served with the lawsuit, which was given to a third party in Shallotte “who does not live with Holmes and who has no authority to accept service of process on Holmes’ behalf,” the motion to dismiss says.
Defense attorneys also said the lawsuit was filed outside the three-year statute of limitations, which expired last year, and that McDow never legally owned the property in question, worth more than $1.4 million.
McDow has not responded to the motion to dismiss, court filings show. 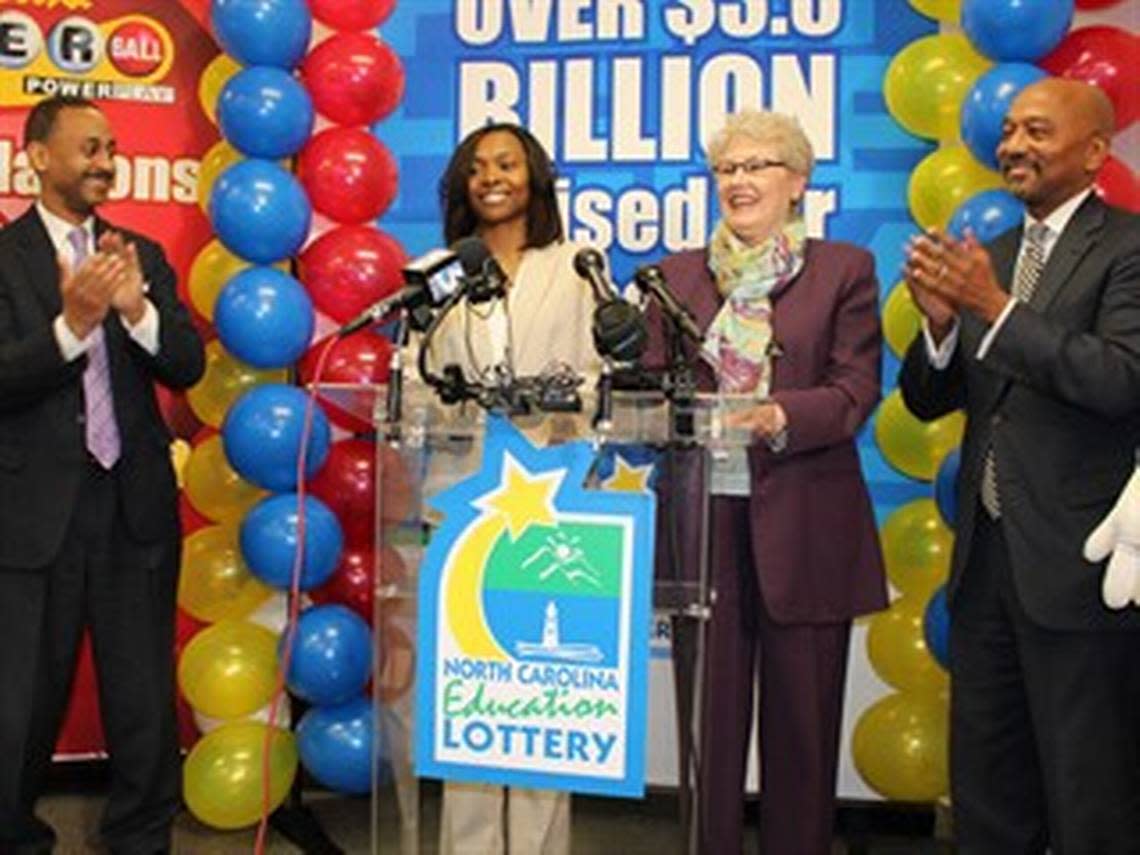 She won $188M Powerball. Now her ex-fiance is suing her from prison, NC lawsuit says

He says she gave away $1.4 million worth of gifts to him — including a 77-acre dirt bike track — while he was incarcerated.