The World Is Experiencing a New Form of Autocracy

Super Moderator
The World Is Experiencing a New Form of Autocracy

Today’s authoritarians use legal measures to subvert constitutional constraints on their power.
The World Is Experiencing a New Form of Autocracy 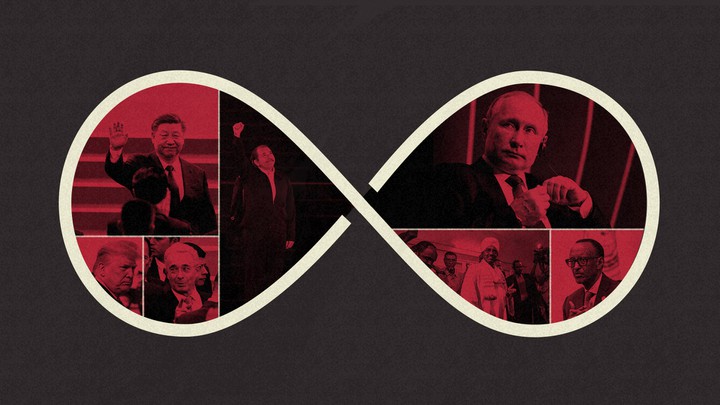 
In March 2018, Donald Trump, addressing a crowd of donors at his Florida estate, told what sounded like a joke. He was talking about the recent amendment of China’s constitution to remove presidential term limits, allowing Xi Jinping to serve in that office indefinitely. About Xi, Trump said:


“He’s now president for life, president for life. And he’s great.​
And look, he was able to do that. I think it’s great.​
​
Maybe we’ll have to give it a shot someday.” ​
​
The crowd cheered and applauded in response. In fact, Trump has told one version or another of this joke many times since becoming president.

And though Trump’s remarks are generally perceived as facetious, many of his counterparts on the world stage are quite serious. In January, Vladimir Putin addressed the Russian nation in an annual State of the Union–esque speech. Alongside pledges to improve living standards by, among other things, offering free hot meals to schoolchildren, he proposed major constitutional reforms that could see the presidential office weakened and the prime ministry and State Council strengthened—measures very likely aimed at ensuring that Putin can remain in power after 2024, when constitutional term limits will force him out of the presidency.

This is how authoritarianism looks today. Our original study documents all term-limit-evasion strategies worldwide since the year 2000. We found that presidential-term-limit evasion is exceedingly common: About one-third of all presidents who reached the end of their term made a serious attempt to overstay. Two-thirds of those who made the attempt succeeded.


What’s particularly interesting is not only that so many presidents try to evade term limits, but that they are more and more sophisticated and legalistic in how they do so. Whereas leaders once used unmistakably authoritarian actions to stay in power, such as banning opposition parties or dismissing the legislature, today’s heads of state instead use democratic institutions and legal measures to subvert constitutional constraints on their power. More specifically, we found that there are four basic strategies for evading term limits, none of which violates a constitution outright: adding constitutional amendments, rewriting the constitution, using the courts to reinterpret the constitution, and appointing a placeholder president.

The first and most common strategy—used in some 66 percent of the attempts in our data—is simply to amend the constitution to extend or remove term limits. This is the path Xi took when, with hardly a whisper of dissent, he removed any limit on the number of five-year terms he could serve. Often, such changes are breathtaking in their sophistication. In Rwanda, for instance, Paul Kagame presided over a constitutional-amendment process that will allow him to serve for a total of 35 years (or longer, if further amendments are in the offing). The effort began in 2015, when Kagame’s party encouraged voters to sign petitions urging Parliament to give the president an additional term. The party—the Rwandan Patriotic Front—withheld its formal endorsement for these efforts until a critical mass of signatures was reached. Once this happened, Parliament passed an amendment unanimously, and then a reported 98.9 percent of voters in a popular referendum ensured that the amendment would take effect. Throughout, Kagame himself never made public whether he intended to remain in office or otherwise commented on the amendment process, and he announced his intention to seek another term only after the measure had passed. The amendment allows Kagame—and only Kagame—an additional seven-year term, after which a new limit of two five-year terms (passed as part of the amendment package) will apply to him on a prospective basis. Thus, he may remain in office until 2034 while preserving an aura of democratic legitimacy and guaranteeing, at least on paper, that his successor will be limited to a maximum of 10 years.

A third strategy, which has had remarkable success in Latin America in particular, is to challenge the very legality of term limits in court. This strategy constitutes about 15 percent of evasion attempts since the turn of the millennium. In Nicaragua, for example, President Daniel Ortega was able to successfully remove term limits from his nation’s constitution by arguing that they were a violation of his human rights. The court, reasoning from a body of constitutional and human-rights law, agreed. A similar story unfolded in Bolivia and Honduras. In fact, though one might be tempted to put faith in judges to prevent executive overstay, our study found that courts are remarkably pliant. With the important exception of Colombia, where the Constitutional Court blocked Álvaro Uribe’s attempt to extend his term a second time, courts tend to sign off on term-limit evasion in all its guises.

A fourth strategy, also constituting about 15 percent of evasion attempts, is what we call the “faithful-agent strategy,” which involves presidents seeking a successor they can control, so that they can continue to govern even while formally out of office. Putin was previously able to extend his own rule using this strategy. He took office in 2000, when Russian presidents were limited to two consecutive terms of four years. In 2008, rather than simply moving aside or seeking to overstay his legal term as president, he stepped down, endorsing a handpicked successor, Dmitry Medvedev, as president. Medvedev promised to nominate Putin as prime minister if elected. With Putin’s endorsement, Medvedev easily won the presidency, and very shortly after taking office he oversaw a parliamentary vote confirming Putin as prime minister. For the next four years, Putin served as a potent prime minister to the relatively inert President Medvedev. After constitutional reforms passed in that era, Putin could return to two more consecutive presidential terms, now extended to six years each. Thus, without violating the law, Putin has maintained an iron grip on power for 20 years; he is the longest-serving Russian head of state since Joseph Stalin.

Peter Beinart: The new authoritarians are waging war on women

Finally, a small handful of presidents were able to stay past their term by illegally delaying or canceling elections. However, this is the least frequently used strategy (only 5 percent of evasion attempts), most likely because it is more evidently illegal and authoritarian.

Still, one-third of overstay attempts did fail—and typically in spectacular fashion. In recent years, popular movements in Malawi, Burkina Faso, and Paraguay, among many others, have forced presidents to back down. (Burning down parliament, where the president’s allies may be at work on legislation to extend the president’s term, seems to be a particularly effective palliative.)

In Paraguay, for example, a recent push to amend the constitution to remove its strict single five-year term limits initially looked poised to succeed: Then-President Horacio Cartes secured enough support to get the Paraguayan Senate to pass an amendment that would have removed term limits. Unexpectedly, however, the opposition called for nationwide protests, and thousands of Paraguayans heeded the call—a variety of political and religious groups joined in, including, most prominently, the Catholic Church. Protesters clashed with the police, leading to one protester's death, but they managed to burn down the part of the legislature where the Senate met. The strong public backlash was enough to pressure Cartes to back down, formally withdrawing his support for the amendment via a letter to the archbishop of Asunción. Congress then voted down the proposal, and in the 2018 elections, Cartes did not participate, allowing for the election of current President Mario Abdo Benítez.


Paraguay is just one recent example of the power of public resistance; our study found that popular resistance through the coordinated efforts of various civil-society groups, including students, clergy, labor unions, and—in some cases most crucially—defectors from the president’s own party, is by far the most effective means of preventing overstay. Another source of optimism is that in well-established democracies with a long history of rotation from power, executive overstay is relatively rare. Out of these democracies in our data set, only 18 percent of leaders attempted to evade term limits, mostly through constitutional amendments.

Nonetheless, the legal and constitutional strategies that leaders use to keep themselves in power are particularly dangerous precisely because they are perceived as being procedurally democratic. A new generation of autocrats has perfected the art of looking democratic while pursuing authoritarian goals. Whether they succeed usually comes down to whether ordinary citizens take the threat seriously enough to do something about it.


This story is part of the project “The Battle for the Constitution,” in partnership with the National Constitution Center.

We want to hear what you think about this article. Submit a letter to the editor or write to letters@theatlantic.com. 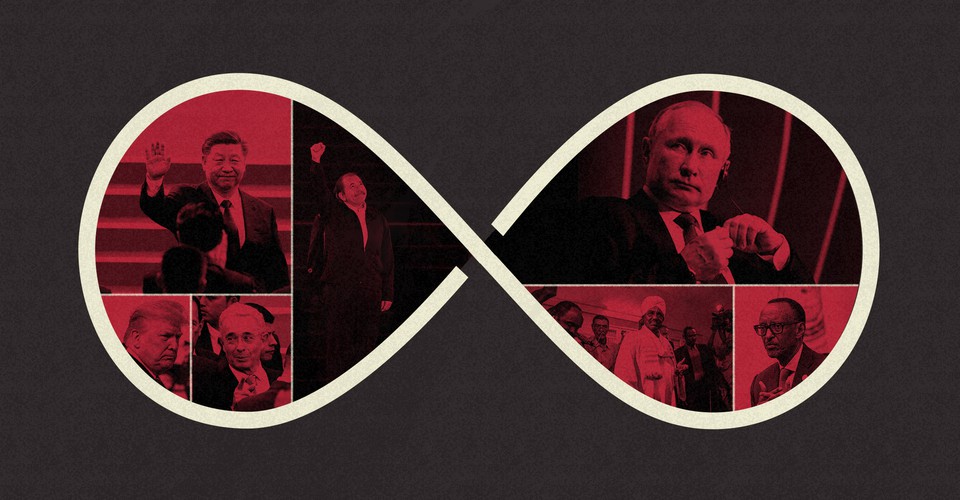 The World Is Experiencing a New Form of Autocracy

Today’s authoritarians use legal measures to subvert constitutional constraints on their power.