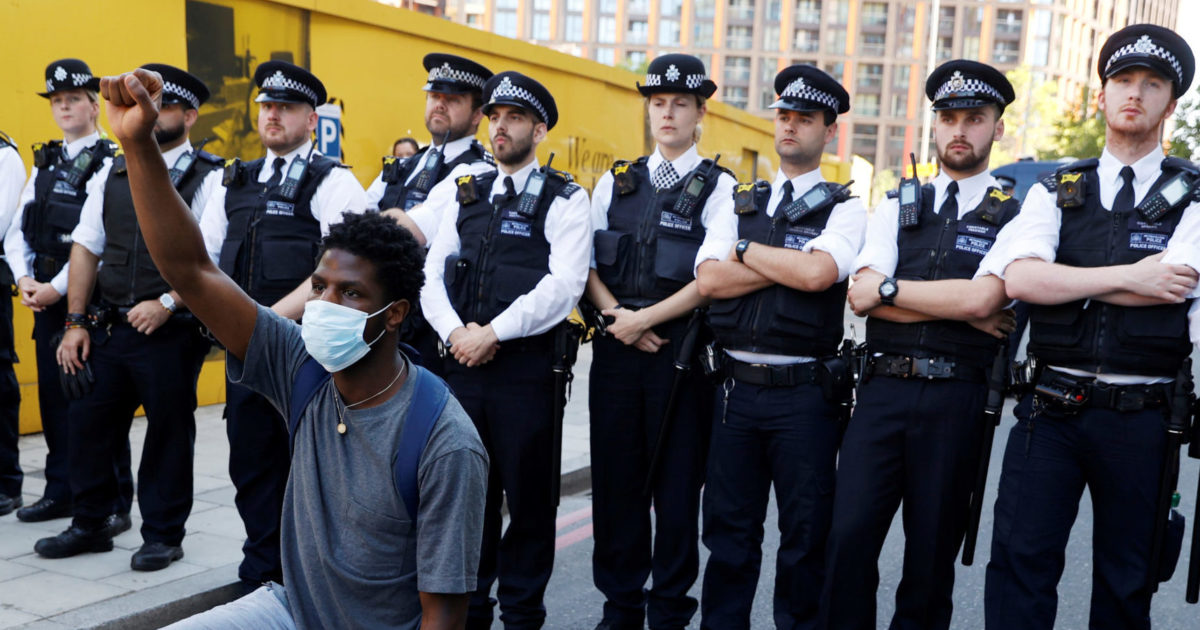 The government is introducing a raft of legislation to enhance police powers and quash dissent. As always, racialised protesters will be at the sharp end of this authoritarianism, write Zehrah Hasan, James Aiken and Callum Lynch.

New laws signal a pervasive and deliberate effort by the government to quash protest in the UK.

In an important win for direct action groups in the UK, the Stansted 15 – a group of activists who stopped a racist deportation charter flight and were subsequently convicted of terror-related charges – learnt last week that the Crown Prosecution Service (CPS) will not be taking further action against them, having rightly had their convictions quashed by the Court of Appeal in January. Despite this victory, the criminalisation of protesters nonetheless remains rife.

From arresting demonstrators and a journalist at the appalling Folkestone Napier barracks, where 400 asylum seekers are being held, to fining anti-HS2 protesters and one of their legal representatives at the Euston tunnel, the police have continued in recent weeks their long-standing practice of brandishing their power against those standing in the way of state violence and environmental degradation.

It is clear that now more than ever, there is a pervasive and deliberate effort by this government to suppress protest as a vital form of resistance.

Don’t fall for it. This attack on our rights is an attempt to silence the people and hide from accountability.
And we won’t stand for it. https://t.co/nEO2JIjiVA
— Liberty (@libertyhq) March 1, 2021
Click to expand...

Covid-19 regulations have acted as a catalyst for pushing forward this agenda. But beyond the pandemic, there lies a raft of legislation that plans to enhance police powers and shrink the space for dissent. And within an institutionally racist system, Black, brown and racialised protesters and communities will continue to be at the sharp end of this response.

We know that Black and brown protesters are more likely to face police violence at protests and to be criminalised or penalised for their actions. This happened to the Mangrove 9 in 1970; at the Black People’s Day of Action in 1981, and again at last summer’s Black Lives Matter protests.

Yet even in the face of oppressive policing, these protests have been instrumental in mobilising change and furthering the fight for racial justice. It is therefore vital we stand firmly against narrowing the space for civil disobedience, the attempted silencing of Black voices, and the chilling effect this will have on protest rights more broadly.

Our right to protest is crucially protected under Article 10 (freedom of expression) and Article 11 (freedom of assembly) of the European Convention on Human Rights and given effect in the UK through the Human Rights Act 1998.

Yet in direct response to the Black Lives Matter protests of 2020, Home Secretary Priti Patel called for a review into “how effectively the police manage protests”. As part of this, new legislation called the Protection of the Police and the Public Bill has reportedly emerged.

The bill’s far-reaching effects include lowering the threshold for the police to impose restrictions on protests – from when a demonstration may cause “serious disruption” to “significant disruption”.

This would enable the police to impose conditions on all but the smallest and least impactful protests. Not only does this unnecessarily restrict people’s exercise of their fundamental rights, but the power could also be disproportionately used to quell anti-racist and Black-led protests.

The legislation also plans to create new grounds for stop and search, enabling the police to enact the power on the basis of “preventing significant disruption”. Stop and search powers are an acknowledged intimidation tactic, which has been used against protesters before. They are also inherently racist, with Black people being 40 times more likely to be stopped and searched under ‘suspicionless’ powers – anyone can be stopped and searched without the need for reasonable suspicion – than their white counterparts. And with the deputy commissioner of the Met announcing this week that it plans to continue disproportionate stop and searches against young Black men, it is undeniable that these new amendments coming into force would mean Black protesters bearing the brunt of them.

Another piece of legislation, the Police Powers and Protection Bill, which was first announced in the Queen’s Speech in 2019, has similarly troubling consequences for the right to protest. One of its proposed features is to create protest-free zones, banning certain protests in strategic areas or forcing them to relocate to places where they will be unseen and unheard. Any restriction of the right to protest must be proportionate and necessary, in line with human rights laws. Without proper scrutiny, ‘protest-free zones’ could be used against anti-racist demonstrations to silence and divert them.

The legislation also makes a commitment to the police officers’ “covenant”, which threatens to deepen the inequality of arms when protesters face police. This covenant suggests providing more “physical safety equipment” to officers – separate to Covid-19-related PPE – and greater “access to justice” for officers in disputes with the public.

Such proposals are egregious and frankly offensive to our communities. We know the police used riot gear and batons disproportionately against Black and brown protesters last summer. We know that police generally are five times more likely to use forces against Black people than white people in England and Wales. And we also know the police already enjoy near impunity for their actions – with no successful prosecutions of officers for deaths in police custody since 1971 and only six Met officers being disciplined over stop and search abuse in the last seven years, despite 5,000 complaints being received.


These aspects of the so-called covenant would only further shield the police from accountability whilst simultaneously worsening the challenges faced by those subject to violent and unlawful police conduct. Access to justice no doubt is a problem – but one for protesters, not the police.

The fact that both these bills are surfacing, or resurfacing, at a time when the Human Rights Act is, once again, subject to attack, and when the government is attempting to limit the scope of judicial review, is also no coincidence.

These changes come in the midst of the wholly authoritarian Covert Human Intelligence Sources Bill, which allows police officers and other government department officials to commit crimes with impunity while conducting certain investigations. As Mohamed Elmaazi writing for Jacobin notes, the wording of the bill puts protest groups and anti-racist activists squarely in the crosshairs of these powers. We already know the police have used covert operations to infiltrate Stephen Lawrence’s family and sexually assault environmental demonstrators. These further threats on trade union organising, anti-racist campaigners and protesters will place us at greater risk of police brutality and egregiously undermine the safety of our organising spaces.

The strategic architecture of these legislative threats is clear. Not only is the state trying to weaken the protection of our fundamental rights, it is also simultaneously trying to suppress our ability to call this out on the streets.

We must collectively resist any attempt to suppress the right to protest and the space for dissent. We must stand with all communities and causes who rely on it to hold the state to account – from climate and environmental justice, to ending detention and deportations, to ensuring Black Lives Matter.

In a system that is built on our oppression, our collective power through protest cannot be underestimated. So when it comes under threat, in the words of Darcus Howe, “Now it’s time to do something ourselves.”

Zehrah Hasan is an immigration and public law barrister at Garden Court Chambers, as well as a founding member and Director of Black Protest Legal Support.
Make Contribution to Remove NSFW Ads for Year
You must log in or register to reply here.
Share:
Facebook Twitter Reddit Pinterest Tumblr WhatsApp Email Link
Top