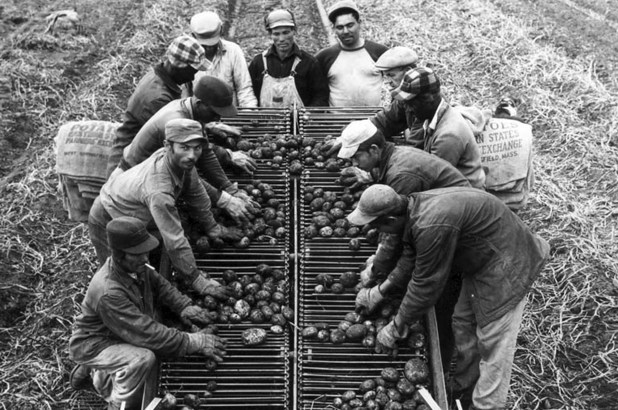 MORE ON:
MIGRANTS
Kamala isn’t at the southern border — but migrant kids are getting Veep’s book

Far from border, VP Harris says migrants need ‘sense of hope that help is on the way’
Starting in World War II, when labor shortages meant Long Island farmers lacked workers to tend their fields, they began importing migrant laborers from Mexico, Jamaica and the American South to do the job.
Or, as one Suffolk County grower put it:
“People used to own slaves. Now we just rent them.”
The horror stories of the migrants who toiled in Suffolk County’s fields in the second half of the 20th century are detailed in “Long Island Migrant Labor Camps: Dust for Blood” (History Press) by Mark Torres, out now.
At its peak, up to 7,000 migrants a year worked on Long Island farms, including 4,500 in Suffolk County in 1960 doing the exhausting job of “stoop labor” — scooping up potatoes or picking cauliflower, beans, strawberries and other fruits — for as little as a dollar an hour.
While locals initially opposed building camps for the workers to live in, scores of these residences eventually came to pepper the Suffolk County landscape. Normally situated on the outskirts of town and surrounded by barbed wire fences and “No Trespassing” signs, these migrant camps were often littered with garbage, plagued by raw sewage and rife with inoperable (or nonexistent) plumbing and heating systems.
A labor camp in Cutchogue.Courtesy of the Southold Historical Society, Southold, New York
Fires frequently blazed through these camps. Four migrants died in an inferno at the Cutchogue camp in 1961, while another claimed three at Bridgehampton in 1968. Those three may have died because the door to their lodging had been nailed shut to keep out a cold draft, Torres writes.
Many of the migrant workers were teenagers, such as Alfonzo Mahone, who was living in Macon, Ga., in 1968 when a white van pulled up and a “Miss Viola” leaned out and offered him work picking apples in Virginia.
Out of financial necessity, Alfonzo’s mother agreed to let her son go. After sleeping in the van for a week and eating mostly bologna or peanut butter sandwiches, Alfonzo was dropped off with a “harsh” crew leader in Virginia, who promised $70 a week for picking tomatoes, Torres writes. But he was paid just “a meager $14.”
Inside the living quarters at the Cutchogue labor camp in 1947.Courtesy of the Southold Historical Society, Southold New York
So the teen hitched a ride with Charles Wright, a recruiter who promised better opportunities in the fields of Suffolk County.
Alfonzo eventually found work at a potato processing shed for the Southampton Produce Company in Bridgehampton. Under a sign reading “a bruised potato never heals,” he sorted and bagged the spuds. It was “grimy” and “grueling” work that, after just three days, led to him hurting his hand.
“You get your small ass out of here and get back to the camp,” the foreman barked when the teenager told him he was injured.
But when his employers realized he was unable to work, they refused to pay him and kicked him out of the camp he shared with 20 other workers. At just 15, Alfonzo was discarded as a migrant laborer — disabled, poor and a 1,000 miles from home.
Many other workers went into debt by simply commuting to their jobs. In the 1960s, Andrew Anderson, a crew leader at the infamous Cutchogue labor camp, charged migrants $30 to be transported to Suffolk County from the South, and another $1.25 a day to be trucked from the camps where they lived to the fields where they worked. While workers could earn $47 a week, they had to pay $40 in room and board.
Migrant workers at the Beanery Plant on Shelter Island.Courtesy of the Shelter Island Historical Society
“You ain’t never getting out of debt with Anderson,” one 14-year-old laborer says in the 1968 documentary “What Harvest for the Reaper?” “You in debt when you get there. You in debt when you leave.”
In the early 1960s, Betty Jean Johnson was lured from Virginia to a labor camp in Calverton with the promise of plentiful work for $1.25 an hour, but after deductions for “rent, meals, and other fees” she took home as little as $5 a week.
“They bring us from the South and make slaves of us,” Johnson later told a 1961 congressional subcommittee investigating allegations of abuse at the migrant camps.

While laws were eventually passed to ensure the camps were safe and sanitary, the Suffolk County farmers frequently “failed or outright refused” to adhere to them, Torres writes.
Facing new regulations, sometimes the farmers simply evicted the migrants and closed their camps. Some paid only minor fines — like $25 for having an “open cesspool” where migrant children played — while others were found innocent of wrongdoing, tried in courts by judges who were friends and fellow farmers.
While the use of migrant labor in Suffolk County did wane over the years — due first to agricultural automation and then fewer farms — about 50 camps still existed in 1986 and the last one didn’t disappear until 2006. Today, almost no physical evidence of the camps remain but, as Torres writes, their shameful history should not be forgotten:


“That this system would thrive for as long as it did in one of the most affluent counties in the country leaves a shameful and lasting legacy.”

Registered
When did slavery end?

I seeing the same terrorist/anti-capitalist tactics being used to suppress wages or economic opportunities in the U.S. as they did back in the day. They always have some effeminate reasons to obscure what they are doing. It is not about paying us wages, but entering into civil business relationships/Intellectual Property without mass shootings or killings. Blocking you from leaving the country to seek out better opportunities, interfering with your relationships with other countries.