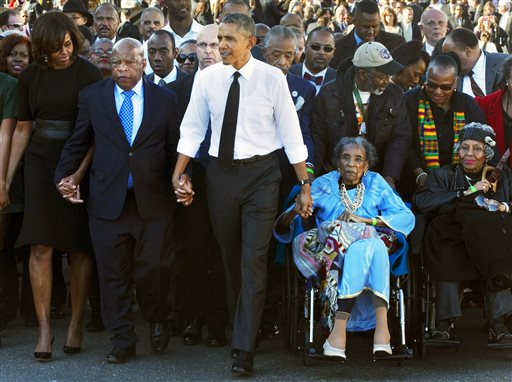 In this March 7, 2015 file photo, President Barack Obama, center, holds hands with
Rep. John Lewis, D-Ga., left, and Amelia Boynton Robinson, right, who were both
beaten during “Bloody Sunday,” as they walk across the Edmund Pettus Bridge in
Selma, Ala., for the 50th anniversary of “Bloody Sunday.” Boynton Robinson was
hospitalized in July after having a major stroke and turned 104 on Aug. 18.​

BIRMINGHAM, Ala. (AP) — Amelia Boynton Robinson, a civil rights activist who nearly died while helping lead the “Bloody Sunday” civil rights march in 1965, championed voting rights for blacks and was the first black woman to run for Congress in Alabama, died early Wednesday at age 104, her son Bruce Boynton said.

Boynton Robinson was among those beaten during the voting rights march across the Edmund Pettus Bridge in Selma, Alabama, in March 1965 that became known as “Bloody Sunday.” State troopers teargased and clubbed the marchers as they tried to cross the bridge. A newspaper photo showing Boynton Robinson, who had been beaten unconscious, drew wide attention to the movement.

Fifty years later, Barack Obama, the first black president of the United States, pushed her across the span in a wheelchair during a commemoration.

In January, Boynton Robinson attended the State of the Union address as a special guest of Democratic Alabama Rep. Terri Sewell, who said Boynton’s 1964 run for Congress paved the way for her. Sewell is Alabama’s first elected black congresswoman. Boynton was the first woman to run on a Democratic ticket in Alabama and the first black woman to run for Congress in the state, according to the Encyclopedia of Alabama.

“Mrs. Boynton Robinson suffered grave injustices on the Edmund Pettus Bridge in Selma at the hands of state troopers on Bloody Sunday, yet she refused to be intimidated,” Sewell said in January. “She marched with Dr. Martin Luther King, my colleague Rep. John Lewis and thousands of others from Selma to Montgomery and ultimately witnessed the day when their work led to the passage of the historic Voting Rights Act of 1965.”

Boynton Robinson had asked Martin Luther King Jr. to come to Selma to mobilize the local community in the civil rights movement. She worked with the Southern Christian Leadership Conference and helped plan the Selma to Montgomery march. She was invited as a guest of honor to attend the signing of the Voting Rights Act of 1965 by President Lyndon B. Johnson.

Her role in the event was reprised in the movie “Selma,” where she was portrayed by actress Lorraine Toussaint.

“The truth of it is that was her entire life. That’s what she was completely taken with,” Bruce Boynton said of his mother’s role in shaping the civil rights movement. “She was a loving person, very supportive — but civil rights was her life.”

Boynton Robinson, born in Savannah, Georgia, worked as an educator there and with the U.S. Department of Agriculture in Selma, Alabama.

She educated local residents on food production, nutrition health care and more, according to the Encyclopedia of Alabama. Tuskegee University officials have said Boynton Robinson graduated from the school in 1927 and in recent years donated much of her personal memorabilia from the 1950s and 1960s to the university.

Boynton said the family is planning events in his mother’s honor in Tuskegee and is also working to arrange a ceremony at the Edmund Pettus Bridge on Sept. 8.​

THANKS for posting. I met Mr. Boynton several years ago. A great and courageous man. Very sorry to hear of his passing. We are in those days, their final hours, their final times, when more and more of those of a Courageous Era are giving way to their successors in a still ongoing fight.
N