Bolivians Return Evo Morales’s Party to Power One Year After a U.S.-Applauded Coup 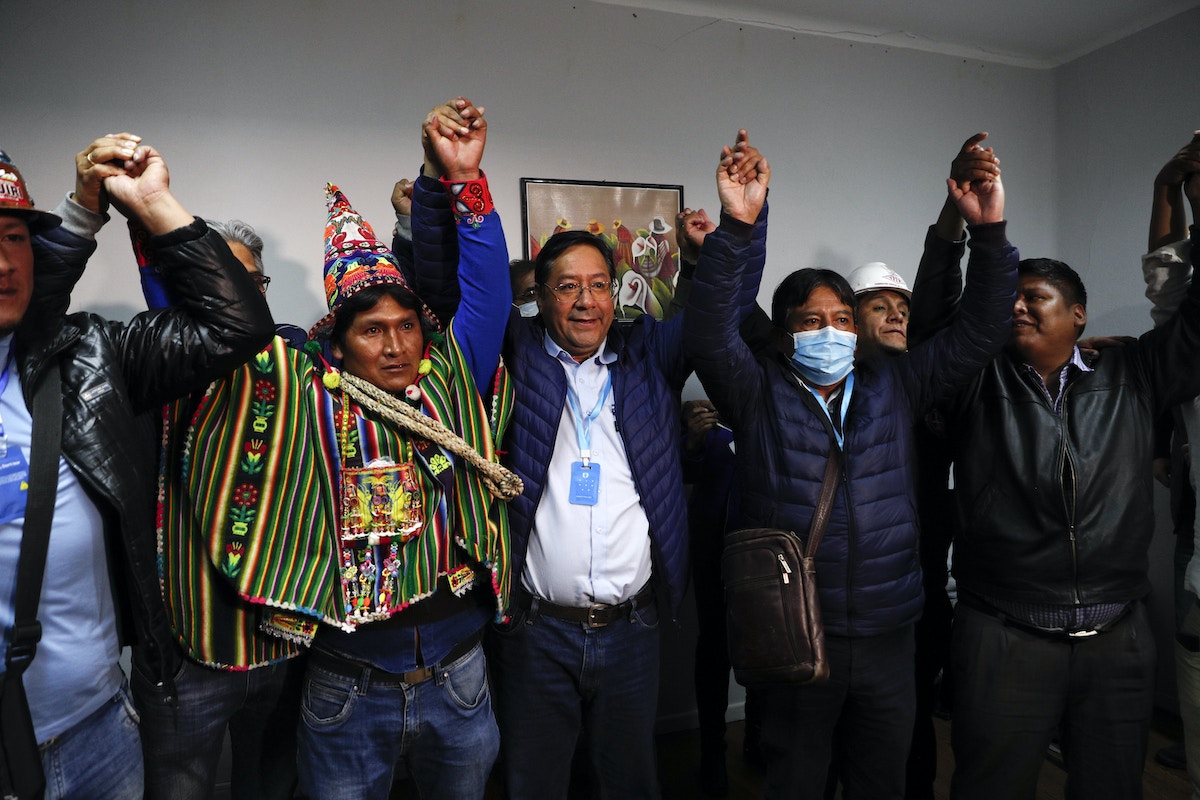 Bolivians Return Evo Morales’s Party to Power One Year After a U.S.-Applauded Coup

Right-wing forces cheered by the U.S. tried to destroy one of Latin America’s most vibrant democracies. Voters just restored it.

Right-wing forces cheered by the U.S. tried to destroy one of Latin America’s most vibrant democracies. Voters just restored it. 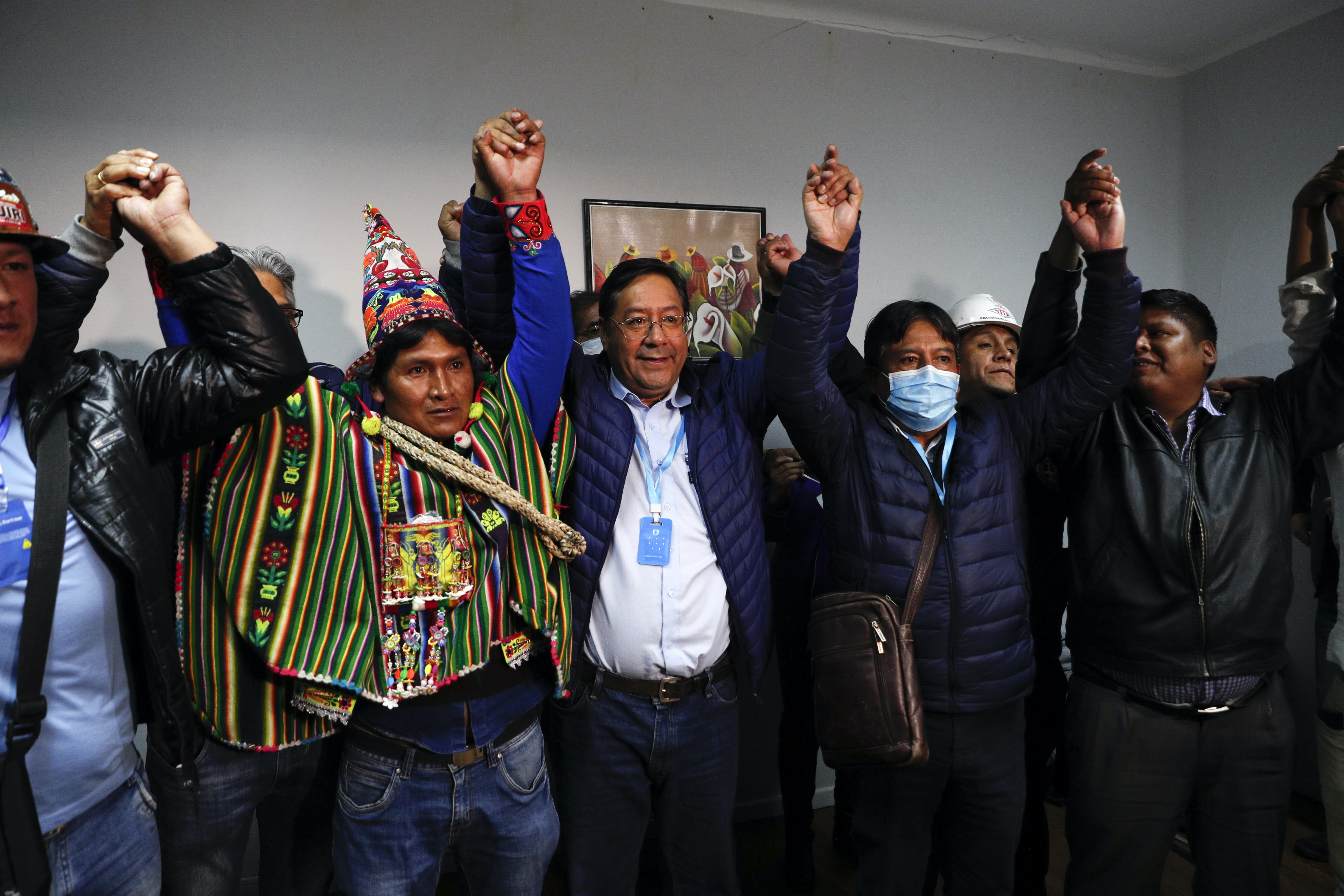 In November 2019, Bolivia’s three-term President Evo Morales was forced under threat of police and military violence to flee to Mexico, just weeks after he was declared the winner of the October presidential election that would have sent him to his fourth term. Installed in his place was an unelected right-wing coup regime, led by self-declared “interim President” Jeanine Áñez, who promptly presided over a military massacre that killed dozens of Morales’s Indigenous supporters and then granted immunity to all the soldiers involved. U.S. Secretary of State Mike Pompeo at the time cheered the coup by citing subsequently debunked claims of election fraud by the Organization of American States, or OAS, and urging “a truly democratic process representative of the people’s will.”

But after the Áñez regime twice postponed scheduled elections this year, Bolivians went to the polls on Sunday. They delivered a resounding victory to presidential candidate Luis Arce, Morales’s former finance minister and the candidate from his Movement Toward Socialism, or MAS, Party. Although official results are still being counted, exit polls from reputable firms show Arce with a blowout victory — over 50 percent against a centrist former president and a far-right coup leader — and Áñez herself conceded that MAS has won: “We do not yet have an official count, but from the data we have, Mr. Arce and [MAS Vice Presidential candidate] Mr. Choquehuanca have won the election. I congratulate the winners and ask them to govern with Bolivia and democracy in mind.”

t is difficult to remember the last time a U.S.-approved military coup in Latin America failed so spectacularly. Even with the U.S.-dominated OAS’s instantly dubious claims of electoral fraud, nobody disputed that Morales received more votes in last October’s election than all other candidates (the only question raised by the OAS was whether his margin of victory was sufficient to win on the first round and avoid a run-off).

Despite Morales’s election win, the Bolivian police and then military made clear to Morales that neither he, his family, nor his closest allies would be safe unless he immediately left the country, as Morales detailed in an interview I conducted with him just weeks after he was driven into exile in Mexico City. In that interview, Morales blamed not only the U.S. for giving the green light to right-wing coup leaders but also attributed the coup to Western anger over his decision to sell some of the country’s valuable lithium supply to China rather than to the West.

After 12 years in office, Morales was not free of controversy or critics. As the first elected Indigenous leader of Bolivia, even some of his core supporters grew wary of what they regarded as his growing reliance on quasi-autocratic tactics in order to govern. Several of his most prominent supporters — both in Bolivia and in South America — were critical of his decision to secure judicial permission to seek a fourth term despite a constitutional term-limits provision of two terms. Even Morales’s long-time close Brazilian ally, former President Lula da Silva — who correctly predicted in a 2019 interview with me that “you can be certain that if Evo Morales runs for president, he’ll win in Bolivia” — nonetheless called Morales’s pursuit of a fourth term a “mistake.”

But none of those criticisms changed a central, unavoidable fact: More Bolivians voted for Morales to be their president in 2019 than any other candidate. And in a democracy, that is supposed to be decisive; for those purporting to believe in democracy, that should be the end of the matter. That is why Lula, in his Guardian interview shortly after the coup where he criticized Morales’s bid for a fourth term, nonetheless emphasized the far more important point: “what they did with him was a crime. It was a coup – this is terrible for Latin America.”

And whatever critiques one can legitimately voice about Morales — it is hard to imagine any leader ruling for more than a decade without alienating some supporters and making mistakes — there is no question that Morales’s presidency, by almost every metric, was a success. After decades of instability in the country, he ushered in a stable and thriving democracy, presided over economic growth that even western financial institutions praised, and worked to ensure a far more equitable distribution of those resources than ever before, particularly to the country’s long-oppressed Indigenous minority and its rural farmers. That success is what was destroyed, on purpose, when the Bolivian presidency was decided in 2019 not democratically but by force.

The West’s reaction to the 2019 Bolivian coup featured all of its classic propaganda tropes. Western officials, media outlets, and think tank writers invoked the standard Orwellian inversion of heralding a coup of any democratically elected leader they do not like as a “victory for democracy.” In this warped formula, it is not the U.S.-supported coup plotters but the overthrown democratically elected leader who is the “threat to democracy.”

Depicting U.S.-supported coups as democratic and democratically elected leaders disliked by the U.S. as “dictators” has been a staple of U.S. foreign policy propaganda for decades. That is the rubric under which the Obama administration and its Secretary of State John Kerry somehow celebrated one of the world’s worst despots, Egyptian Gen. Abdel-Fattah el-Sissi, as “restoring democracy” following the brutal military coup he carried out.

But thanks to Sunday’s stunning rebuke in Bolivia, the standard tactics failed. Ever since Morales’s election victory almost exactly one year ago today, Bolivians never stopped marching, protesting, risking their liberty and their lives — even in the middle of a pandemic — to demand their rights of democracy and self-governance. Leading up to the election, the coup regime and right-wing factions in the military were menacingly vowing — in response to polls universally showing MAS likely to win — that they would do anything to prevent the return to power of Morales’s party.

At least as of now, though, it looks as though the margin of victory delivered to MAS by the Bolivian people was so stunning, so decisive, that there are few options left for the retrograde forces — in Bolivia, Washington, and Brussels — which tried to destroy the country’s democracy. Anyone who believes in the fundamentals of democracy, regardless of ideology, should be cheering the Bolivians who sacrificed so much to restore their right of self-rule and hoping that the stability and prosperity they enjoyed under Morales expands even further under his first democratically elected successor. 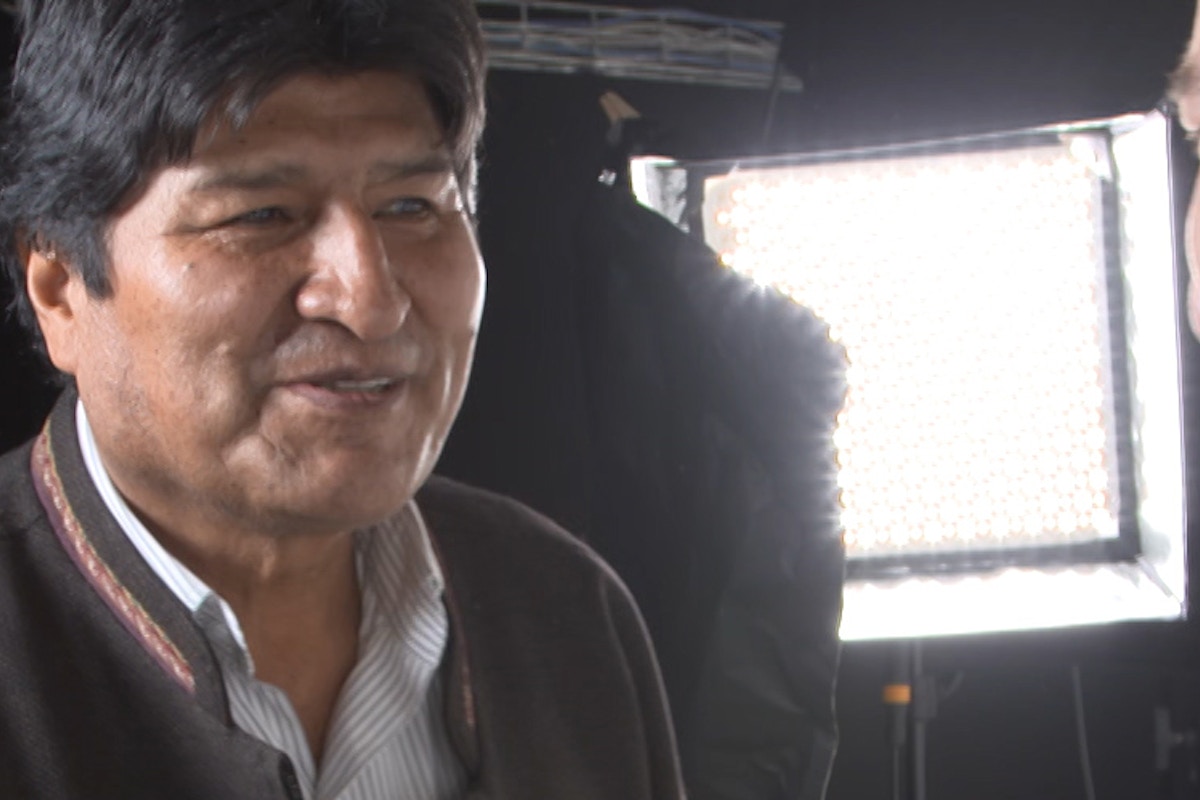 Watch: Glenn Greenwald’s Exclusive Interview With Bolivia’s Evo Morales, Who Was Deposed in a Coup

Morales spoke about the events that led to his removal and exile as well as broader trends in regional and global politics.