WASHINGTON — Embattled presidential hopeful Herman Cain told his staff Tuesday that he was reassessing his campaign after allegations that he'd carried on a 13-year extramarital affair.

Cain, one of the top-tier Republican contenders in the 2012 field, repeated his denials from Monday, when Ginger White, an unemployed single mother from Atlanta, leveled the claim in a televised interview with Atlanta's Fox station WAGA.

"I deny those charges, unequivocally," Cain told his campaign staff, according to a transcript of the call, first reported by National Review Online. "That being said, obviously this is a cause for reassessment. ... We have to do a reassessment as to whether or not this is going to create too much of a cloud, in some people's minds, as to whether or not they would be able to support us going forth."

Cain is also the subject of earlier allegations that he'd sexually harassed several women in the 1990s while he was the head of the National Restaurant Association. He's denied those as well.

White's allegations Monday have added to the obstacles confronting his presidential effort, which were nowhere in sight a few weeks ago when his campaign suddenly soared.

Cain drew only 6 percent in a CNN national poll of Republican voters in early September. By mid-October, support for the charismatic former Godfather's Pizza chief executive had vaulted to 25 percent, putting him into a dead heat with front-runner Mitt Romney, a former Massachusetts governor.

Cain's backing dipped to 14 percent earlier this month after the sexual harassment claims emerged. But he remains in a four-way tie in Iowa with Romney, former House Speaker Newt Gingrich and U.S. Rep. Ron Paul of Texas, according to a recent Bloomberg News poll.

"He still has levels of support," said Republican pollster David Winston, a longtime ally of Gingrich. "There are all these accusations out there. I think what you're seeing the public doing in response is taking them seriously. It's also waiting for proof."

The tolerance of Republican voters could be tested, however. The first ballots to be cast in the presidential race will be Jan. 3 in Iowa. But if Cain's image becomes one of a lightning rod for trouble, he might not last that long.

WASHINGTON -- Former Republican National Committee Chairman Michael Steele spoke Tuesday with embattled GOP presidential candidate Herman Cain and offered him this advice: "Think long and hard about what you do next and how you go about it."

"I said, I'm not going to go out here and blow you up and call on you to get out of the race," Steele recounted in a phone interview. "If you decide to stay in the voters are going to let you know how they feel about that."

He also told Cain: "It's not just about the presidential campaign anymore. It's about your wife and your family and your own credibility, and your opportunities and options beyond this moment."

"This is serious. There are impacts and ramifications not just for Herman and his family but for the party as a whole," Steele said.

Steele and Cain are two of the best-known black conservatives in the country, and have known one another for over a decade, Steele said. The two men talked on the phone Tuesday as Cain told senior aides that he was "reassessing" his candidacy after an Atlanta woman named Ginger White said Monday that she and Cain had a 13-year extramarital affair.

Steele, who came under immense pressure himself to resign from the RNC during his tenure there and is now a paid analyst for MSNBC, said he did not push Cain to make a decision one way or another.

"A lot of people want to pontificate and tell him what he should do and what he must do. And I don't know how many of those folks have actually said, 'I'm not here to tell you what to do but to let you know a friend is with you, and b, your heart will tell you what to do next,'" Steele said.

"You know the truth. You know the facts. You know the realities. And you've got to evaluate all of that, in toto, and say to [Cain's wife] Gloria, you know, 'We can do this.' Because she may say to you, 'No we can't.'"

Steele also said he thought race had, to some degree, colored the Republican party's response to the numerous allegations of sexual harassment and misconduct lodged against Cain by several different women.

But when asked to clarify whether he thinks Cain has been treated differently than a white politician would be if he were in the same situation, Steele indicated he did not think so.

"I don't think that Congressman [Anthony] Weiner's time was any easier or harder than Herman Cain's at this moment," Steele said. "In fact I think Herman's would be a little bit worse because he is running for president of the United States. It's not like he's a congressman who can't keep his fingers off of his Twitter buttons."

Lotta words but after all the bullshit he's saying to Cain, albeit tactfully, get the fuck out!!!!

"Think long and hard about what you do next and how you go about it."

"It's not just about the presidential campaign anymore. It's about your wife and your family and your own credibility, and your opportunities and options beyond this moment."
Click to expand...

see my thread-State of the Union rebuttal: ‘Some of us are not stupid,’ praises Colbert on mainboard 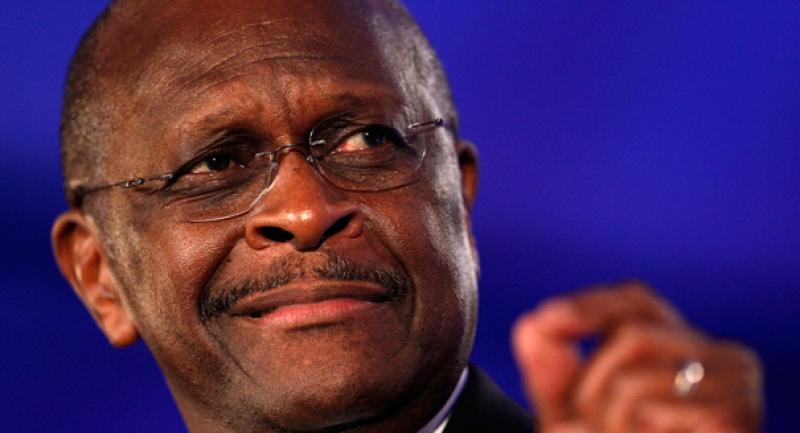 "If you can't get enough votes to become the Republican presidential nominee (like Ron Paul), blame yourself!"

"I hold in these two fingers, a GLORIOUS booger! Wanna see me eat it? Log on to HermanCainEatsABooger.com" 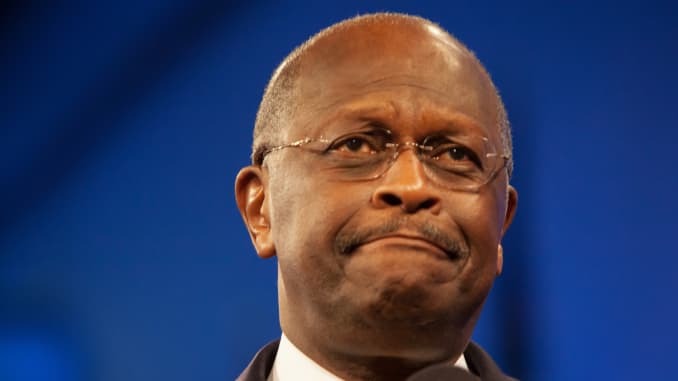 
Herman Cain, a former presidential hopeful who was once considered by President Donald Trump for the Federal Reserve, has died after being hospitalized with the coronavirus. He was 74.

Cain was among the highest-profile public figures in the United States to have died from Covid-19. A 74-year-old survivor of stage 4 colon cancer, Cain had been a business executive and the board chairman of a branch of Kansas City’s Federal Reserve Bank before moving into Republican politics and eventually becoming a presidential candidate.

Last year, President Donald Trump briefly considered picking Cain as his nominee to join the Federal Reserve Board. Cain remained a vocal supporter of Trump’s after his nomination was withdrawn, and he attended the president’s controversial reelection rally in Oklahoma in June, shortly before being diagnosed with the coronavirus.

Dan Calabrese, who edited Cain’s website and had written about his colleague’s diagnosis, did not immediately respond to CNBC’s request for additional comment.

Cain had been hospitalized in Atlanta on July 1, two days after being told he had tested positive for Covid-19, according to a statement posted to his social media accounts at the time.

He did not require a respirator and was “awake and alert” when he checked in to the hospital, the statement said. “Please join with us in praying for Mr. Cain, and for everyone who has contracted the coronavirus – as well as their families,” it said.
Cain’s social media accounts occasionally provided vague updates on his condition. A message on July 5 said he was “making progress” and that “more encouraging news” was expected to come soon. Two days later, Cain’s Twitter account said “doctors are trying to make sure his oxygen levels are right.”

On July 10, another tweet said Cain himself described his status as “cruise control,” because “the progress is slow but his breathing is getting stronger every day. Make no mistake: He is improving!”

Less than two weeks before receiving his diagnosis, Cain had attended Trump’s rally in Tulsa, Oklahoma, the marquee event for the president’s self-proclaimed reelection campaign kickoff.

Cain, a vocal supporter of Trump, tweeted a photograph of himself at the rally surrounded by other attendees, none of whom appeared to be wearing masks or other protective gear.

Herman Cain, the former pizza mogul and brief frontrunner in the 2012 Republican presidential primary, has died of COVID-19. It is not known for sure where he contracted the virus, but he came down with symptoms nine days after attending President Trump's campaign rally in Tulsa on June 20, and posted a picture online of himself there in a group of people without masks.

IN OTHER NEWS, Bill Montgomery, the 80-year-old co-founder of the conservative student group Turning Point USA, has also died of COVID-19.

It has not been reported where he might have come down with the virus, but the other founder of TPUSA, Charlie Kirk, has repeatedly spread misinformation about the pandemic in general and masks in particular. On Kirk's podcast last weekend, he stated he refuses to wear a mask, and falsely suggested that doing so might make you sicker. The official TPUSA Twitter account deleted a tweet mocking mask-wearing after Montgomery's death.

The whole conservative movement has been trying to deny, downplay, and disregard this pandemic from the start. The resulting collateral damage now includes several prominent figures in their own ranks. But even that might not be enough to convince them to shift direction — 66-year-old Rep. Louis Gohmert (R-Tex.) recently tested positive, but he suggested on TV that it might have been from wearing a mask. Ryan Cooper

The tragic consequences of anti-mask paranoia

Herman Cain, the former pizza mogul and brief frontrunner in the 2012 Republican presidential primary, has died of COVID-19. It is not known for sure where he contracted the virus, but he came down with symptoms nine days after attending President Trump's campaign rally in Tulsa on June 20, and...

Registered
Herman Cain received a diagnosis of stage IV colon cancer in 2006 and was given only a 30% of survival. He was declared cancer free in 2007. Cain knew he was of high risk for Covid-19, yet he chose to tempt fate. BLAME YOURSELF!
Last edited: Jul 31, 2020
You must log in or register to reply here.
Share:
Facebook Twitter Reddit Pinterest Tumblr WhatsApp Email Link
Top