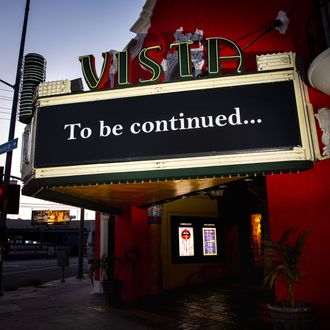 Tarantino fanboys (hey, Trisha Paytas!) have a new L.A. hang. Quentin Tarantino has added to his Los Angeles iconography by purchasing the historic Vista Theatre in Los Feliz on Sunset. On Dax Shepard’s Armchair Expert podcast, Tarantino revealed his new venture, saying that the single-screen theater would likely reopen “around Christmastime.” The theater, which shut down during the COVID-19 pandemic like most things we cherish, will screen “only film — it won’t be a revival house,” he added. (Tarantino is already the proud owner of the New Beverly Cinema, which he purchased in 2007. The theatre primarily shows 35-mm. and 16-mm. films from Tarantino’s personal collection.) “We’ll show new movies that come out where they give us a film print,” he said of the Vista. “It’s not going to be like the New Beverly. The New Beverly has its own vibe. The Vista is like a crown-jewel kind of thing.” The Vista Theatre first opened nearly a century ago, on October 9, 1923, as the Lou Bard Playhouse, showing vaudeville acts. “We’ll show older films, but it will be like you can hold a four-night engagement,” Tarantino added.


The New Beverly reopened in mid-June to sold-out shows, per The Hollywood Reporter. The Vista closed in April 2020 with the message “To Be Continued …” left on its marquee. Over the past year, fans hoped Tarantino would rescue the Cinerama Dome, another L.A. landmark, which the director even featured in Once Upon a Time in Hollywood. “It’s not like they are going to demolish the Cinerama Dome,” he responded on the podcast. “Somebody’s going to buy it. There are so many different options that could work out. I’m not that worried about it.”