playahaitian said:
I was gonna make a thread about this...

was it better when OVERT PUBLIC Racism was 'accepted'?

When a white person showed their true colors but KNEW that they were more then likely a very physical reaction to their behavior?
Click to expand...

It was better when we as a people stuck together as a family, as a community, a business owners, as elected officials.

Fuck what the devil sees, you gotta love yourself and the mirror of yourself first.

We can't even fight back, when we got bitches like Barkley, Carson and Snoop (yeah I said it) fucking up the program.

Good read.
For you ninjas waiting for a vid..there aint one.
so just read the shit.


He said a lot of real shit. stuff that made me think

Politicians on the national level do little shit here and there to maintain power and keep the people at ease, but they never really fix things whereas the people will be in a good positions from that point forward. But i dont blame Obama for that, i blame the American people who consider this a race instead of a marathon. This aint some love fest, this is business!!

I liked the analogy he used when he equated past leader to so called new leaders.
A lot of these dudes (al, Jesse etc) are substitutes. Theyre just substitutes that focus more so on revenue.

As for the new generations views on racism....there may be some hope.
But imho....the racism train aint gonna stop rolling anytime soon.
Chris kids may have a different view on race because of the lives that they live, but his kids dont rep the majority.


oh yeah....
Like Chris said....
Obama and them shouldve let this country crash and burn.
Imho...thats the only way we couldve awakened the masses and got them out of their bs comfort zones. Too many mofos being coddled.

Sometimes seeing extreme poverty, starvation ..things like that....will wake a mofo up in a heartbeat.

durham said:
It was better when we as a people stuck together as a family, as a community, a business owners, as elected officials.
Click to expand...

uh..but sadly....thats when Black folks had more unity...more families etc.
When non-whites were overt with their bs....and didnt fool u into thinking they wanted to be your buddy. of course it starts with how you view yourselves, but still.
Last edited: Dec 1, 2014

everything in your post was on point except for this.

chris actually stated the opposite. bush only catered to his base while obama tried(s) to appease everyone.

Registered
Was worth the read, I appreciate the share

Registered
Thanks for this, it really was a good read. 5 star post. 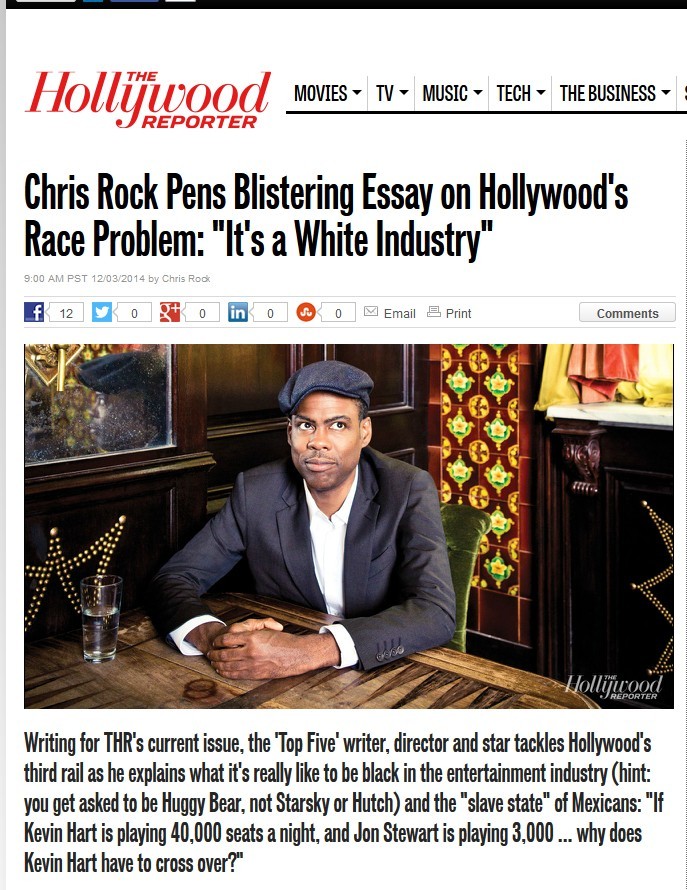 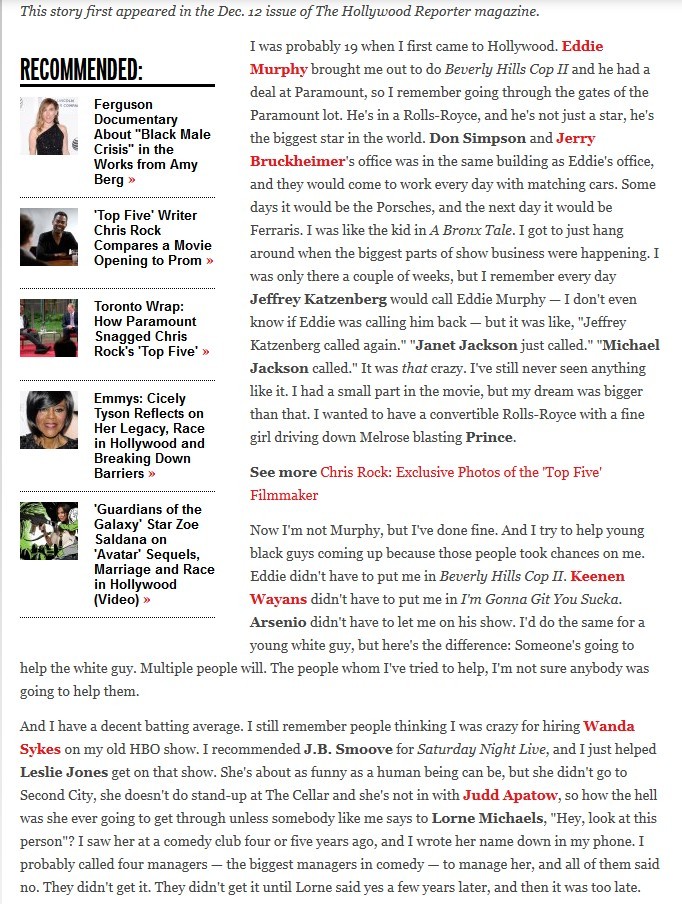 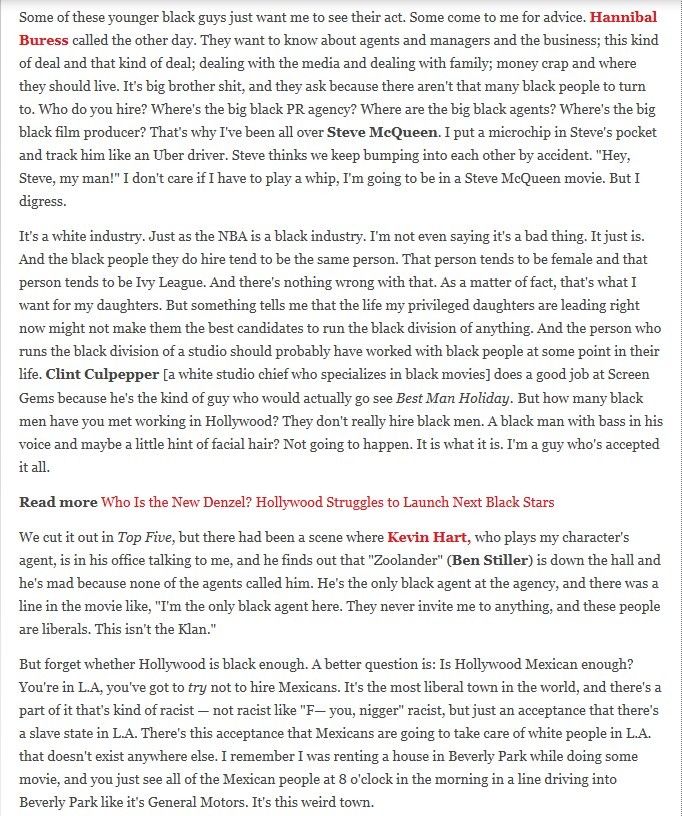 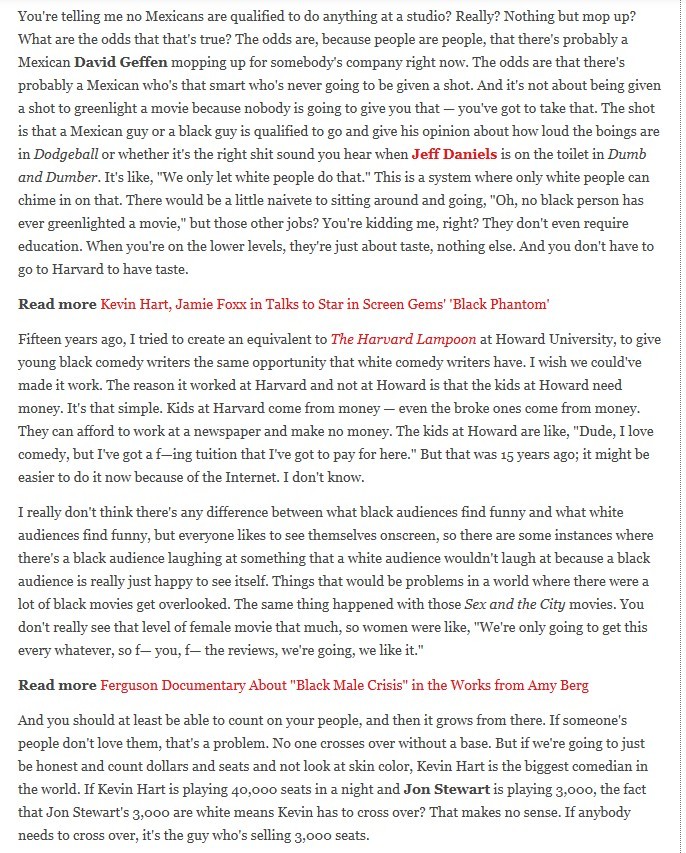 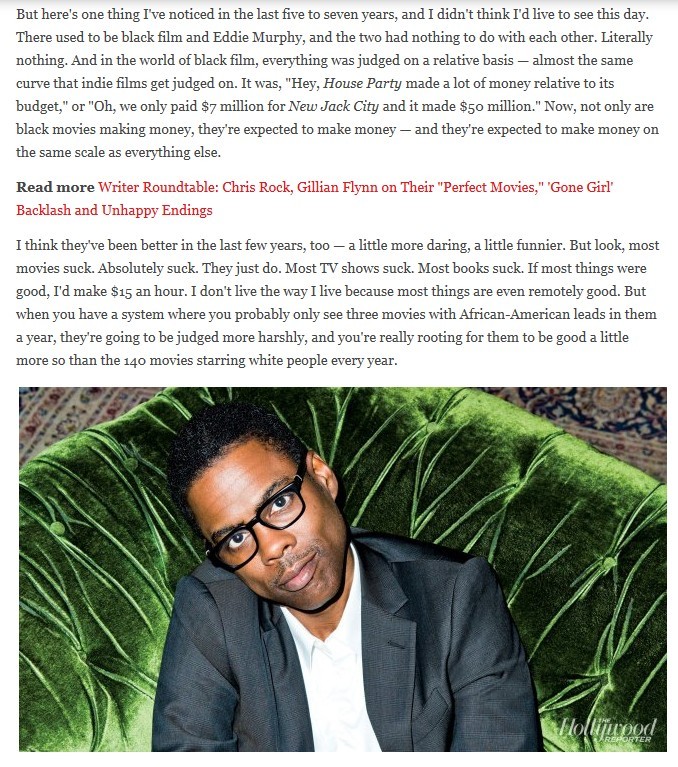 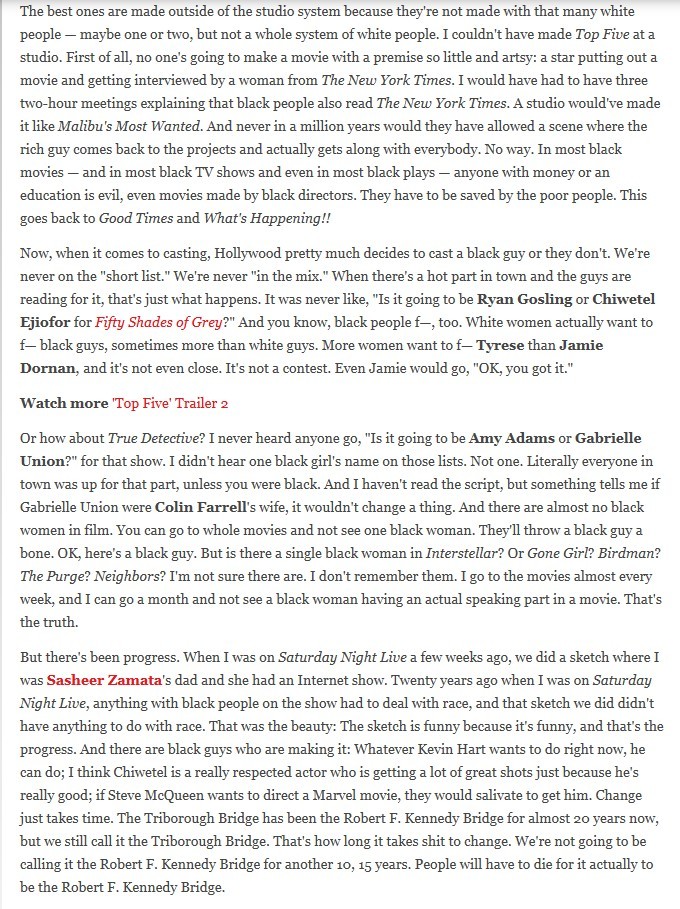 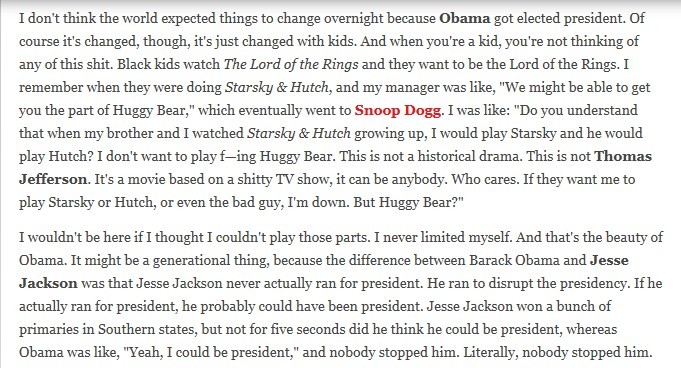 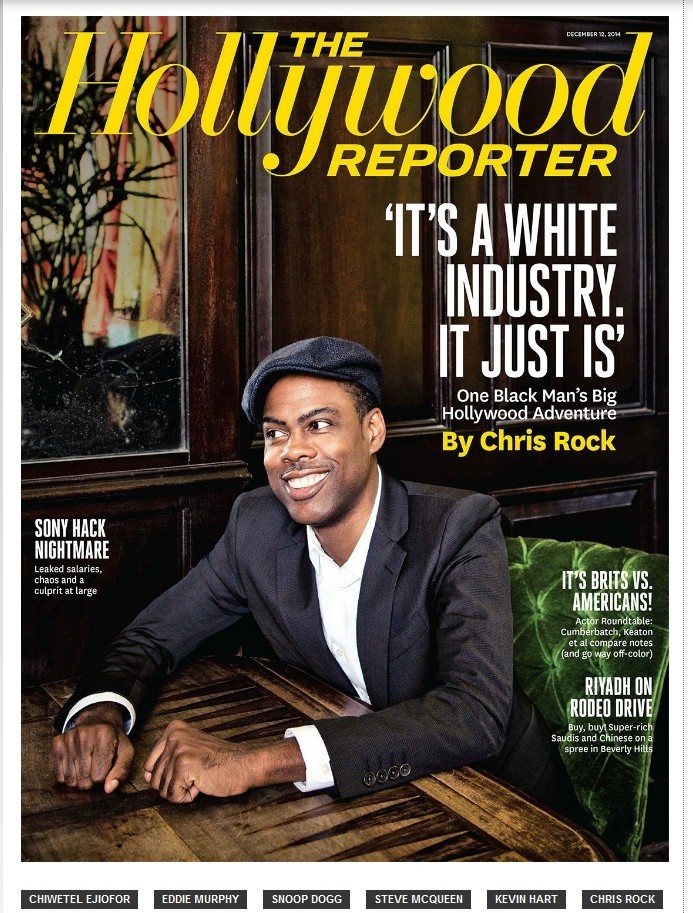 On racism in Hollywood:

"Hollywood pretty much decides to cast a black guy or they don't. We're never on the 'short list.' We're never 'in the mix.' When there's a hot part in town and the guys are reading for it, that's just what happens. It was never like, 'Is it going to be Ryan Gosling or Chiwetel Ejiofor for Fifty Shades of Grey?' And you know, black people fuck, too. White women actually want to fuck black guys, sometimes more than white guys. More women want to fuck Tyrese than Jamie Dornan, and it's not even close." —The Hollywood Reporter

"I've got arty taste, which is great and not great at the same time. I'd rather work with Wes Anderson, but I don't look like Owen Wilson. I'd love to work with Alexander Payne and Richard Linklater. But they don't really do those movies with black people that much." —Rolling Stone

"There are almost no black women in film. You can go to whole movies and not see one black woman. They'll throw a black guy a bone. OK, here's a black guy. But is there a single black woman in Interstellar? Or Gone Girl? Birdman? The Purge? Neighbors? ... I go to the movies almost every week, and I can go a month and not see a black woman having an actual speaking part in a movie." —The Hollywood Reporter

"But forget whether Hollywood is black enough. A better question is: Is Hollywood Mexican enough? You're in L.A, you've got to try not to hire Mexicans. It's the most liberal town in the world, and there's a part of it that's kind of racist — not racist like 'Fuck you, ******' racist, but just an acceptance that there's a slave state in L.A. There's this acceptance that Mexicans are going to take care of white people in L.A. that doesn't exist anywhere else." —The Hollywood Reporter

"The Stones can play arenas because the Stones have songs that are not purely based on references that you had to be there for. I love Public Enemy. But they don't have 'You Can't Always Get What You Want.' Kanye will be able to play arenas maybe more than Jay Z honestly, because there's a vulnerability and an emotional thing that happens in his music that doesn't happen in most rap. I love rap, but rap is like comedy: It rots." —Rolling Stone

"You know, if you get an offer to host the Grammys and an offer to host the BET Awards — host the BET Awards. Because it skews younger and you’ll get more new fans doing that than even doing the Oscars. And that’s kind of the name of the game: How many new fans are you going to get doing this? It’s all about new fans. My kids don’t know who Eddie Murphy is, my kids don’t know who Madonna is." —Grantland

"[Adam Sandler] had the confidence of a black wide receiver." —The New Yorker

"People always wondered about Richard Pryor, was he as funny not on drugs as he was on drugs. Lenny Bruce, same thing. Sam Kinison, same thing. George Carlin’s probably the only one I saw be as funny as a sober person as he was as a drug addict." —Grantland

"Obama is like the polio vaccine of racism — people still get polio and die, but there is a vaccine. They don't have to get it. And my kids, you know, it's been 12 years now and there hasn't been one racial incident in my mostly white neighborhood — not even a tiny one." —Rolling Stone

On his career ambitions:

"The whole 'Be a role model to people' [idea] is kind of racist when you think about it ... It suggests that my behavior is not natural. It’s like, 'Hey I don’t beat my wife because I don’t beat my wife, not because I’m trying to help the race out.' Know what I mean? I read because I want to read. It's like, you have a negative image of your people as a whole if you’re putting all of your eggs in my basket." —Grantland

"I don't care if I have to play a whip, I'm going to be in a Steve McQueen movie." —The Hollywood Reporter

"Nat Turner’s a fucking nerd. He gets taught to read and write by his white massa, and he gets sold, and now he has to go out in the fields like everybody else, and he’s so not equipped for this shit ... It’s, like, ‘Oh, shit! Everything I’ve been taught is bullshit!’ And he organizes guys and has this bloody fuckin’ takeover. I’d love to do that movie." —The New Yorker

Platinum Member
man chris woke the fuck up and has been going HARD. I applaud the man, and I will be in the theater day one to support!!!

I didn't understand this analogy.... could somebody break it down?

If you saw Tina Turner and Ike having a lovely breakfast over there, would you say their relationship’s improved? Some people would. But a smart person would go, “Oh, he stopped punching her in the face.” It’s not up to her. Ike and Tina Turner’s relationship has nothing to do with Tina Turner. Nothing. It just doesn’t.
Click to expand...

If you saw Tina Turner and Ike having a lovely breakfast over there, would you say their relationship’s improved? Some people would. But a smart person would go, “Oh, he stopped punching her in the face.” It’s not up to her. Ike and Tina Turner’s relationship has nothing to do with Tina Turner. Nothing. It just doesn’t.
Click to expand...

Dhustla said:
I didn't understand this analogy.... could somebody break it down?
Click to expand...

Ike deciding to stop hitting Tina in the face isn't improvement from both parties. Ike just decided to stop beating on her.

In this country's case, white america decided to stop with their outright segregation laws and legal discrimination.


Dhustla said:
I didn't understand this analogy.... could somebody break it down?
Click to expand...

In our case, it's always the oppressor's (white people) responsibility to stop being racist, it has nothing to do with us(black people).

Damn, this is why he's one of the top comedians ever. Incredibly smart and conscious.

Certified Pussy Poster
Chris Rock Wisdom Generator: Let Him Tell You How It Is

BGOL Investor
On a side note, just saw "Top 5". It was a really good movie. Great piece of work/art Mr. Rock!

BGOL Investor
Great interview...this brotha is always on point and i been trying to make an effort to support everything he does. Wifey and i just caught top 5 last night. And laughed our asses off

Hes definately in my top 5 comedians of all time

BGOL Investor
Very informative on Chris. He say some off the wall shiit but he bringing the truth in this one. Gained new admiration for his corn ball ass. He reinvented his brand and is a shred businessman. Props to his buck tooth ashy ass.

Rock is the best social critic comic of my generation