BGOL Investor
Just finished episode 5! I swear they just pulled the rug right out from under me. Damn that was a cinematic masterpiece. Great show. 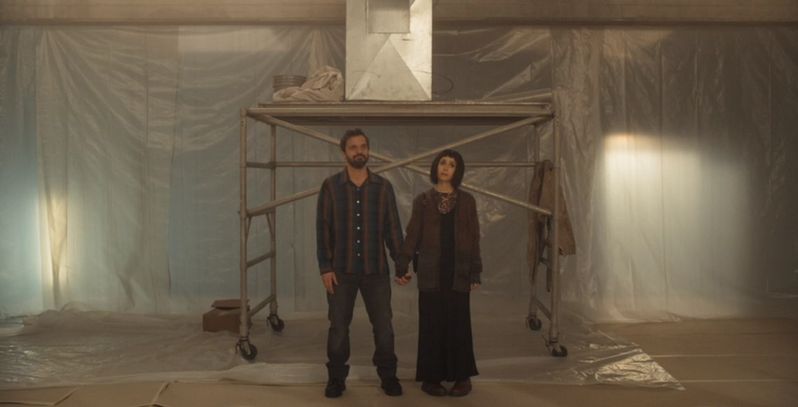 Mythic Quest: Raven's Banquet has spent four episodes introducing viewers to the various game developers working on the titular Mythic Quest video game, but Episode 5 takes a big detour. Instead of focusing on the antics of Ian Grimm and his development team, Episode 5: A Dark Quiet Death instead focuses on the origin of the development studio itself, and delivers the series' best episode to date in the process.


Directed by Mythic Quest star and creator Rob McElhenney, Episode 5: A Dark Quiet Death starts in the early 90s, where we are introduced to Doc and Bean (nicknames they give each other after talking about the classic Sega game Dr. Robotnik's Mean Bean Machine). Doc is a video game producer, whereas Bean is a video game fan who is unimpressed by the selection of games at her local store. The two strike up a conversation and eventually fall in love while producing their dream game together, a survival-horror title called Dark Quiet Death.

Doc and Bean manage to secure funding to publish their game from a company in Montreal, and their experimental horror game turns out to be a hit. They then set to work on the sequel, buying the building that would later become the studio that viewers have seen in previous episodes of the show. The episode time jumps to show us specific points in the characters' lives, and how their relationship evolves over the years. 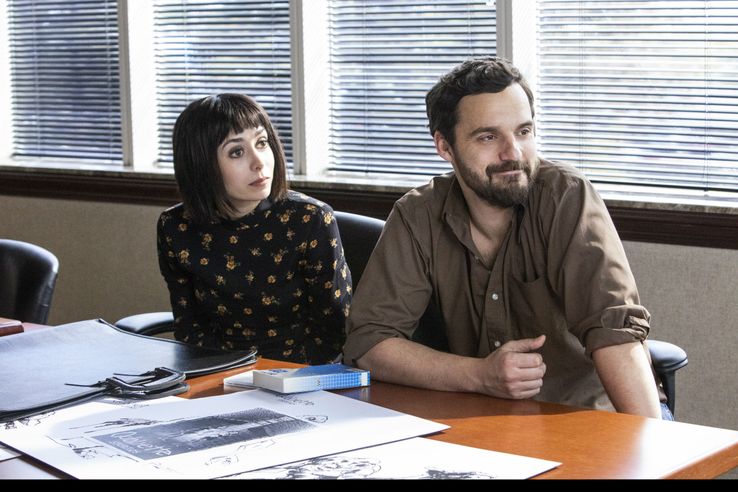 Pressure from the publisher forces Doc and Bean to change their vision for the franchise. Doc is willing to go along with the changes as he knows that it will lead to more sales and more money, but Bean is resistant, wanting instead to stick to her original vision and not sell-out. This leads to a pretty tense fight between the two of them in the office one day, and sadly, their marriage can't withstand the pressure.

The show jumps ahead again, with the publisher and marketing people having increasingly more control over the product. Doc and Bean are divorced, with Doc now dating the Hollywood actress who stars in the Dark Quiet Death film adaptation. The Dark Quiet Death movie stands in stark contrast to the tone of the original games, a likely allusion to the Resident Evil film adaptations and their over-the-top action instead of horror.


Bean is no longer at the development studio at this time, but now Doc is becoming frustrated with the direction of the franchise. The marketing people push him to change key features about the series, as well as incorporate a family-friendly muppet mascot to appeal to kids - a likely reference to Five Nights at Freddy's huge following with children. This is the straw that breaks the camel's back, and Doc gives the company an ultimatum: it's him or the muppet. 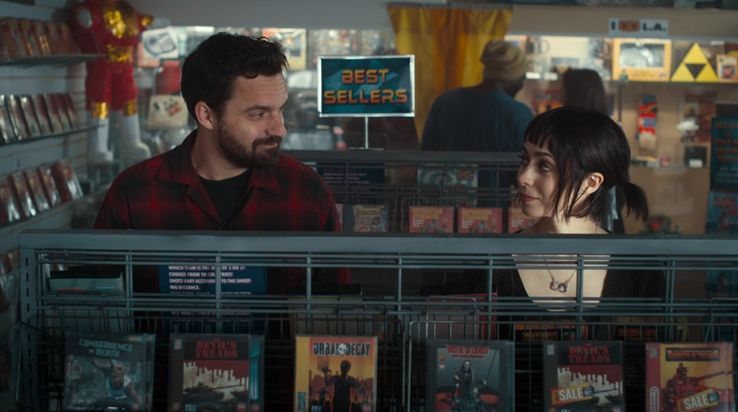 Years later, an older Doc, who no longer works for the game development studio, is browsing the selection at a video game store. He happens to bump into Bean, and the two have a conversation with each other that's very similar to the one they had when they first met in the early 90s. We learn that Bean has since married someone else and is at the store buying a game for her kid. Doc, meanwhile, is no longer dating the Hollywood actress, and clearly longs for his ex-wife. Bean leaves, and Doc finds himself staring at a copy of the original Dark Quiet Death game that they made together. He recommends it to another shopper before walking out of the store himself.

There was some comedy in this episode, but it was mostly a romantic drama. It served as a great origin story for the Mythic Quest development studio, and it would be interesting to see more of these flashbacks. Honestly, this is the most compelling that Mythic Quest has been so far, with the more grounded, realistic story one of genuine emotion. Jake Johnson as Doc and Cristin Milioti as Bean knocked it out of the park with their performances, instantly drawing the viewer in and making the audience care about their relationship despite the fact that they were nowhere to be seen in the previous four episodes.

Tonally, Mythic Quest: Raven's Banquet Episode 5 is vastly different than the other episodes of the show so far. It honestly could work as a standalone project and would be just as engaging. Hopefully Mythic Quest: Raven's Banquet features similar stories like this in future episodes, as it was truly fantastic. This is something to subscribe to Apple TV+ to watch, and it's a shame that the streaming service's viewership is so limited compared to Netflix or Hulu, because too many people will be missing out on what is one of the best episodes of television in recent memory. 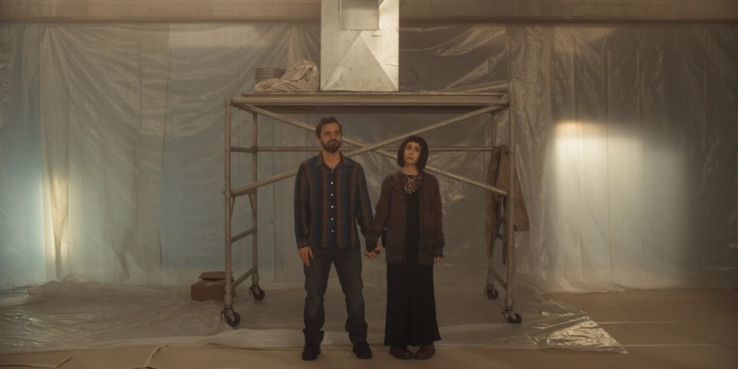 As far as the characters Doc and Bean go, it would be fun to see them interact with the current Mythic Quest development team at some point. The show's themes and conflicts often reflect real-world video game industry happenings, and with that in mind, one has to wonder about the inspiration for the Doc and Bean characters. It seems plausible that they could partly be based on the duo of Ken and Roberta Williams.


Mythic Quest: Raven's Banquet Episode 5: A Dark Quiet Death is worth checking out even if one has no intention of watching any of the other episodes of the show. It's the first episode that really feels like it could be fully enjoyed by video game fans and people who are just looking for a good show to watch. Gripping from start to finish, hopefully there are other episodes of this caliber in Mythic Quest's first season. 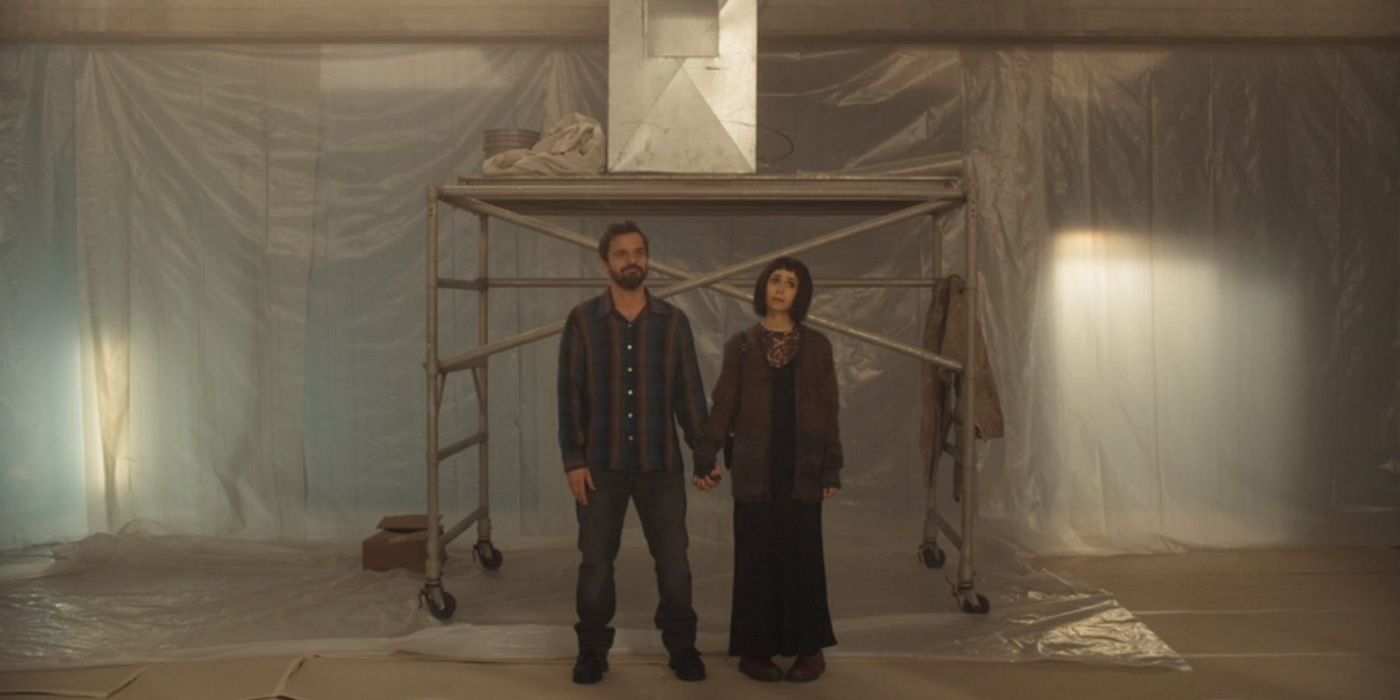 Mythic Quest: Raven's Banquet Episode 5: A Dark Quiet Death is an emotionally-charged masterpiece that represents the best the show has to offer.

BGOL Investor
Mythic Quest: Ravens Banquet, episode 5, A Dark Quiet Death, is one of the most brilliant episodes of television I've ever seen.

I'm watching through Mythic Quest and so up til episode 5 it was exactly what I expected from a show created by the Always Sunny guys. A funny self aware comedy with poorly written gamer dialogue.
Episode 5 is a major curve ball. The majority of the episode is a seemingly unrelated story to the rest of the show so far with Jake Johnson and Cristin Miloti.
The writing is unreal. It drew me in instantly. About halfway through I had to remind myself "wait Rob Mclhenny and Charlie Day wrote this" (also with Megan Ganz.)
If you haven't watched it yet the show is honestly worth it for that episode alone.
Amazing performances, amazing writing, amazing direction. Beautiful episode.

Actually, Rob's sister, Katie McElhenney, wrote that episode. I feel it's important she get credit for the show's best story.

Yeah that episode is so much better than every other episode. Seemed like a different show almost.

I’ve only seen the 1st 4 episodes of this but I’m convinced McElhenney is about to blow up.
Always Sunny is already a cult classic but Mythic Quest really shows what Rob can put together after 14 seasons of experience and a real budget. The production quality is great (reminds me of Community in some aspects), the writing is solid and the cast is really well-rounded. Some of the characters could use a bit more depth so far and admittedly some of the jokes have been lazy – but some have been really good, and the plots are fairly unique and specific to the workplace. It’s got legs.
Rob himself seems to be taking his acting more seriously in this series and there’s some really great heart between his character & Poppy. I just think this show has really shown a lot more facets of Rob’s talents, and hope he becomes more of a name like Mike Schur in the sitcom landscape (And beyond)

The Community feeling is probably because the third co-creator is Megan Ganz, who was a producer and writer on Community!

Imagine if he has made the Minecraft movie!?

The show is generally fine but you're right, this episode is an excellent stand alone story. Reminds me a lot of the one off episode of You're The Worst with the couple who meet in the video store.

That's exactly what I was thinking watching it! Both are great stand alone episodes